I know I just posted my weekly blog but because my life is always very exciting, I had to post again. Siteground hosts my blog but my domain registration is still with Bluehost, my old host.

I got an email today from Siteground that said the “new Centralized DNS service is now active for use for your site(s) listed below. The email included the new DNS settings. Since  my domain is registered  with BlueHost, I have to get that information to them.

I barely understand all this and I really want to do the simplest thing. I have not transferred the domain to Siteground, even though that would make the most sense, because it has seemed too complicated.

I just finished chatting with someone from Bluehost and they would install or do whatever with the new settings but the process means my website could be out of commission for up to 48 hours. That is why I am telling you all this.

If you haven’t read my latest scheduled post yet, please try to do it soon or you will have to wait until sometime on Sunday in the late afternoon to do so.

Thanks for your patience and understanding.

I read Act Your Age, Eve Brown, by Talia Hibbert because Amazon gave me a Kindle credit. The book is the third in a series about three sisters. At first I thought I would read all three books. I was thinking of using at least one for my Jane Austen Book Club. A new season will be starting in February; I plan to have the club read Sense and Sensibility and then have the rest of the readings be about sisters.

Once I finished Act Your Age, I was not that interested in reading the other two. I do not plan on using the book for the club. It was interesting, however to read it and think about it in the context of what Austen wrote.

Many modern Romance novels uses the basic plot from Pride and Prejudice where two people meet, dislike each other but then realize that they have a lot in common and fall in love.  A variation that Hibbert employed is that the two people, after the initial dislike,  have fallen in love but there is a misunderstanding that pulls them apart until the final resolution where they are reunited. To some extent this plot twist is derived from Persuasion, my favorite Jane Austen book, where Anne Eliot and Captain Wentworth  face many misunderstandings over a ten year period before they finally declare their love for each other and presumably live happily ever after.

Act Your Age uses these plot structures but with less writing skill and much more sex than either Jane Austen novel. Eve Brown is a twenty something young woman who has not yet figured out what she wants to be when she grows up. She falls into a position cooking at a bed and breakfast where the owner becomes her love interest. The formulaic nature of the book is reduced somewhat by Eve being a person of color while the owner is not. Locating the book in Britain also adds some interest. The book was an easy read and enjoyable but not particularly noteworthy.

Here it finally is – my long-awaited recap of my summer reading plans. In my original post of July 2, I outlined 5-6 books that I wanted to read this summer. Part of my motivation was to participate in the Jones Library Summer Reading Program. I turned in my log on Aug. 27. At that time, I had read five books; three of them were books I mentioned in that original post.

Since summer doesn’t actually end until Sept. 21, I am counting two more books that I read after I turned my log in as part of my summer reading achievement. Seven books in three months is not bad. I am currently reading Alison Lurie’s Love and Friendship. If i finish that in the next 5d days, I will have read eight books for the summer.

Books I Read this Summer

Molly Greeley, The Heiress: The Revelations of Anne de Bourgh

I liked all the books but Greeley’s second book, imagining the life of Anne de Bourgh from Pride and Prejudice was not as good as her first book, The Clergyman’s Wife about Charlotte Lucas. I will have a separate review of Herbert’s book next week.

I didn’t read the book about training your cat, Wayward Lives or Butler’s Parable of the Talents.  I hope to read them all, but it will have to be part of my ongoing reading schedule.

I am sorry that I am a day late with my weekly post. We are still dealing with the consequences of our flooded basement. On Labor Day, I discovered that my paper files were all wet. Three file drawers got soaked. One had much of my research for my current project. This has been a traumatic event.

Because today is September 11, I do realize that many things have happened in the past twenty years that are far worse and much more devastating than my flooded basement. In memory of all the lives lost on that terrible day, I am reposting something from September 11, 2009.

Today is the eighth anniversary of the terrible events of September 11 2001. This is a particularly poignant day because we are in New York. Eight years ago, I had been in New York the day before, September 10, and woke up, at home, on the morning of the 11th to hear my husband’s voice on the answering machine, ” I don’t know if you have heard what happened in New York but my parents are okay.” As everyone knows, September 11 2001 was a picture perfect New York fall day and the 10th was as well. I felt very steeped in my New York roots because I had spent the evening of the 9th reading about the  pending city elections while I waited for my friend who I was visiting to come home.

Today, September 11, 2009, is not a beautiful day. The weather is  very bad, with high winds and heavy downpours. Because of these bad conditions, we have been unable to attend any commemorative event. Many of them were outdoors.

Despite that, since 2001, I have felt that this day should not be like every other day.  Apparently President  Obama and Congress agree with me. In March the federal government designated September 11th as a National Day of Service and Remembrance.  I really hope that this takes root and becomes how  people commemorate September 11th in future years.

My thoughts are with all the people who suffered a loss on that fateful day and it is my sincerest wish that nothing like that will ever happen to any person or country again.

On Tuesday, while visiting my son and daughter-in-law in Philadelphia, I tripped over their puppy and injured my ankle. We came home the same day and on Wednesday I went to the doctor. It is not broken but soft tissue injuries can take as long to heal as a fracture. As a result I can not skate for four weeks.

Thursday morning we woke up to the worst basement flood we have ever had. The water was in every part of the basement, reaching the bottom shelves of bookcases. On Thursday we worked for eight hours, cleaning and moving things and  there was still more to do.

Today we got up the soaking wet rug and went through all the other wet boxes. Nothing smells’ worse than wet paper. It will be several more days of work to sort through all the stuff, throwing out a lot, I hope. Also, there will probably be things to donate. 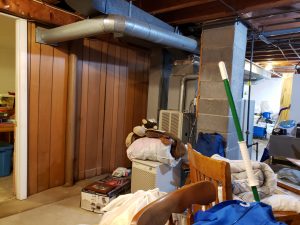 My run of bad luck has continued since April but will have to break at some point. My original plan for today’s post was to  bring you up to date about my summer reading program. Of course, like everything else in my life, it didn’t go the way I had originally anticipated. Hopefully, I can tell you about it next week.