When we were dealing with the flood in our basement because of tropical storm Ida, many of my files were damaged. We were able to save the files that pertain to my current book on faculty wives. Two other file drawers were also wet. Most of those files were either materials from nursing school or from Brewing Battles. Nothing smells worse than wet paper so we threw most of it out.

One thing we saved was a Works Progress Administration (WPA) catalog about breweries in Peoria, Illinois. This was very interesting to me because I think of that area of the country as being a distilling center. Whenever I have a question about brewing or distilling that I can’t answer from my own knowledge base or from Brewing Battles, I turn to the indispensable Dictionary of the History of the American Brewing and Distilling Industry, by William Downard. This is a phenomenal source but since Downard compiled it in 1980, it needs to be updated with new entries for craft beer and micro distilling.

Downard has an entry about Peoria distilling but nothing about Peoria brewing. Chicago, the largest city in Illinois, did have a substantial brewing industry but was never a center of brewing like Milwaukee or New York.

One of the breweries described in the WPA document is Gibbs which existed in Peoria from 1881 to 1954. John M. Gipps, Willis H. Ballance and Leslie Robinson were the incorporators. Each owned one-third of the corporation amount of $150,000. Eventually Ballance owned the brewery. He died in 1913. His son, Willis H Balance, Junior ran the brewery from 1912 to Prohibition. The company’s most well-known beer was Amberlin.

During prohibition, the company manufactured, among other things, non-alcoholic beverages, chemicals, and Illuminating gas. After Repeal, the company re-incorporated. In 1954, Canadian Ace Brewing of Chicago purchased Gibbs and moved the brewing of Amberlin to Chicago. You can read more about Gibbs here. It was fun to learn about Gibbs and in the future, I may write more posts about Peoria breweries. 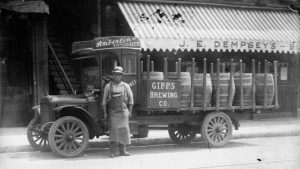 Information for this post came from  the Peoria Historical Society as did the photograph. You can find out more about them here.