A few years ago, we visited both Bruges and Brussels in Belgium. When I started seeing some articles about Belgian brewing and Covid-19 I was interested.

During this pandemic, things have changed quickly. A good example is the Belgian brewers. When Corona first hit and businesses closed, Belgian craft brewers were doing well. Later, the situation changed.

In April, about month into the pandemic, the New York Post had an article about Belgian brewers developing a delivery process because all the bars were closed. It highlighted one craft brewer whose business was expanding due to delivery sales. At this point the picture might have looked rosy.

By May, the situation ad changed. The Belgian Brewers Federation announced that production of beer had dropped 50 percent in April.  The drop in production affected small brewers the most and one third of brewers had ceased producing any beer.

At the beginning of the pandemic, Eoghan Walsh who has a blog, Brussels Beer City, stated a podcast, Cabin Fever. On the podcast where he and other people involved in aspects of the craft brewing industry talk about what they are doing during the pandemic and what they are drinking. I have enjoyed listening to it because it is an easy going way to learn about how the pandemic is affecting the beer industry. 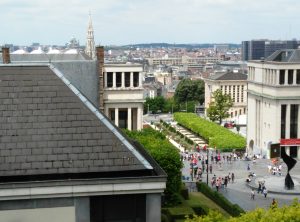