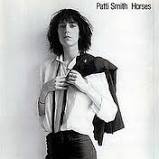 Just Kids by Patti Smith is a memoir about her relationship with Robert Mapplethorpe, the photographer.  They lived together in New York City from 1967 – 1972. Their real experiences occurred during the same time frame as the fictional characters of Marge Piercy’s, Small Changes.

The artistic and musical worlds of New York City were very different from the political and counter-cultural worlds of Cambridge Massachusetts. Although Patti Smith had different encounters with a variety of men she does not write about her experiences from a feminist perspective. Despite the fact that it was very unusual for a woman to front a rock band in the 1970s she does not write about those experiences through a feminist lens.

Her goal, when leaving her small town in rural Jersey, was to become an artist. While living on the streets, she met Robert Mapplethorpe and they began to purse artistic careers together. While they worked on various artistic projects, they met many people who were already famous and some who became, as they did, famous later. To some extent they were in the right place at the right time.

In many ways Andy Warhol was the epicenter of the avant garde art world and Robert, especially, sought to enter his orbit.  They went repeatedly to Max’s, a night club, where they did not directly encounter Warhol but met many other artists and musicians.

On one level, Just Kids is a love story. Although Patti and Robert were not always intimate and Robert realized his homosexuality during the time they lived to together, on an emotional level they were deeply connected.

I enjoyed reading the book and realized I had never really heard her music. I got the album Horses and listened to it. The first time I did not like it at all but the second time around I found some interesting things.  It is clear that, as she says in the book, she was trying to merge poetry and rock.