On June 8, Reading, Pennsylvania held a celebration in honor of the renovation of a statue of Frederick Lauer, a founder and prominent member of the United States Brewers Association.  The statue was the first one ever erected in Reading. To help fund the project, the Berks Brewers Guild created a Lauer’s Fellowship ale. Sale of this beer raised over $5,000.  This article provides further details about the event. 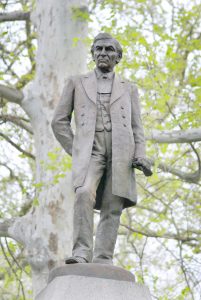 I wrote about Lauer in both my dissertation and Brewing Battles.  In 2003 I wrote several entries about beer, brewing,  taxes, and cirrhosis for Alcohol and Temperance in Modern History, a two volume reference work edited by Jack S. Blocker, jr., David M. Fahey, and Ian R. Tyrell.

Here is the entry:

Frederick Lauer, one of  the nineteenth century’s most prominent brewers, was born in Germany in 1810. His family, wealthy Bavarian landowners, left for political reasons and immigrated to Reading, Pennsylvania in 1822.  In 1826, George Lauer, Frederick’s father built a brewery on the site of an Indian cabin in Reading.  Frederick eventually became the owner of this brewery, one of Reading’s prominent citizens, and a well-known lobbyist for the United States Brewers Association in Washington. Lauer actively participated in the USBA from the first national convention in 1862 until his death in 1883.

German-American brewers founded the USBA in response to the initiation of federal taxes on alcohol to help finance the Civil War.  The first national meeting was in New York on 12 November 1862 where Frederick Lauer was elected President of the new organization.  In 1863 the USBA appointed Lauer chair of a committee charged with overseeing the industry’s Washington affairs.

The most pressing concern of the brewers was a refund of taxes paid on beer brewed before the tax law had become effective. Lauer, along with other brewers, paid taxes on his stock on hand on 1 September 1862. The brewers’ argument for a refund was based on the specific fermentation and storage involved in producing lager beer.

Lauer worked diligently pursuing this matter with Congress but ultimately the brewers won the issue by suing and winning in the Court of Claims. Lauer achieved both a personal and industry victory.

In 1865 Secretary of the Treasury Hugh McCulloch established a commission to study the United States revenue system.  The USBA and the Association of Ale, and Porter and Lager Beer Brewers, a sister organization of ale-brewers,successfully  requested that a panel  be authorized to investigate the excise laws of Europe as they pertained to malt beverages.  Frederick Collins of New York and Mathew Read of Philadelphia were both ale brewers and they visited Great Britain for two weeks.  Frederick Lauer joined them in visiting Belgium, France, the German States and Switzerland.

David Wells, the chair of the Revenue Commission used the brewers’ report, published under the auspices of the USBA, verbatim. Lauer and the USBA were very successful in establishing an amicable, working relationship with government officials. The work they did with David Wells and the Revenue Commission in establishing the method of tax collection for beer was long-lasting.  The stamp attached to the spigot of every barrel removed from a brewery remained the way the federal government collected the excise until Prohibition.

Building on their success with refunds and collection the USBA established an Agitation Committee, which Frederick Lauer chaired.  This committee met regularly with officials and legislators, particularly when legislation was pending which was relevant to the industry.  Their greatest result came from holding the line on tax increases for 34 years. During the same time period, 1864 to 1898, taxes on distilled spirits increased three times.

Frederick Lauer was more prominent for his work as a brewing advocate than as a brewer. The Lauer brewery was never a national leader although it was the third largest in Pennsylvania at one time. Lauer turned over the running of the brewery to his sons, Frank and George in 1882. Lauer died on 12 September 1883.   In 1885 the USBA erected a statue in Frederick Lauer’s honor in City Park, Reading, Pennsylvania.  The statute still exists and is maintained by the Historical Society of Berks County Pennsylvania.