The number was part of the annual show of the Skating Club of Amherst. The club had planned to have a Disney themed show, Be Our Guest in 2020 but had had to cancel two weeks before the performance because of COVID. When that happened, I wrote this post.

My regular readers may remember that in October 2019 I competed in an ISI event, the 33rd Halloween Classic, Winterland Skating School, Rockland, Massachusetts. You can read more about that here and here.

When I was competing, I was extraordinarily nervous and didn’t perform the way I had expected to. My hope for the show was that I would be less nervous this time. I practiced extensively both with the eight other people in the number and on my own. I also tried to be mindful around the event including repeating a mantra that went something like:

I know how to do it.

I believe in myself.

Saturday was the dress rehearsal and as soon as I stepped on the ice once again my legs were like jelly. One of the coaches, perhaps concerned that I might hyperventilate, said I could take my mask off while we were practicing. Another one of the coaches, Kyla, said that I could skate with her and that really made all the difference.

Saturday, we ran through the program about four times and by the last time my legs felt a lot better, and my nervousness had decreased. The problem with the actual event on Sunday was that I didn’t think I would have any practice time. I did try to walk around the rink wearing my skating guards to warm up my muscles a bit. Since all the mindfulness that I did on Saturday hadn’t made any difference I didn’t do any on Sunday. I was able to do  warmup skating for a couple of minutes in an alley behind the curtain.

Once the music started, I was nervous but because I was holding on to Kyla, I was able to perform all the steps. A lot of people told me to try and have fun. I can’t say that I did. Mostly what I felt when the one minute of performing was over was significant relief. A deep sense of accomplishment came next.

Now that I have skated two separate times, in front of an audience, and had intense stage fright, I realize that stage fright is a physiological reaction and there isn’t that much you can do to control it. Given that, I am proud of myself that this time I did all the steps and did not let my fellow performers down.

I am not sure I will ever compete or perform again in front of a crowd but that is something I don’t have to decide at this moment. I can just revel in the fact that I did it on Sunday. 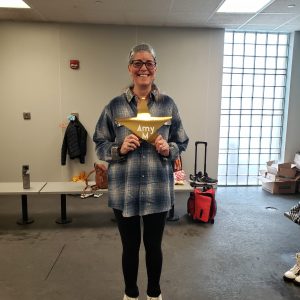 Sorry that I am late with this post. Yesterday just got away from me.