I recently completed a hectic ten days which is one reason I didn’t blog last week. Before this period of intense activity, I had blocked out several weeks’ worth of posts. Theoretically I have post topics for the next few weeks. Today’s topic was supposed to be about the show Stars on Ice.

On April 30th we spent the night in Boston so that I could see Stars on Ice. Everyone who was on the US Olympic team was in the cast as well as Mirai Nagasu who competed in the Olympics four years ago. Although our seats were high up, we were dead center and had a great view. I found it very exciting to see athletes such as Jason Brown and Mariah Bell.

We had a wonderful time but to be honest it feels like that was a year ago. A few days after we came home from Boston, we flew to Florida to spend time with my Aunt Ruth. She is the relative who had a bad accident last year fracturing her hip and wrist. My aunt is quite elderly and still has some chronic health problems which I am trying to help her with.

Although it was nice to be in Florida because it was at least 30 degrees warmer than it is here in western Massachusetts I wouldn’t call the five days we spent there a vacation. Although my aunt is 91, she is not ready to cede any of her authority or autonomy over her own life and there’s really no reason that she should. Her desire to remain as independent as possible does sometimes make caregiving for her more difficult. Therefore, the time in sunny Florida had a decent amount of stress attached to it.

My aunt’s current medical condition has made me think about my own health and what illnesses I fear getting. My mother had Alzheimer’s so any lapse in my memory makes me panicked about getting dementia. My father died of heart disease but somehow, I don’t worry as much about that. I can’t really explain why.

Both my brother and my first cousin died of ALS, Lou Gehrig’s disease, and I do worry some about that. My cousin did genetic testing that revealed a mutated gene that may have been responsible for his disease. My brother never did that kind of testing so whether he had a genetic component or not we will never know. I just don’t want to burden my family with either dementia or ALS. I also wouldn’t want my children or potential grandchildren to get Lou Gehrig’s disease.

Even though I worry sometimes about these diseases I realize that life is a crap shoot. A bus could hit me tomorrow and that would be it. I am going to focus on the beautiful skating I saw at Stars on Ice, the shiny warm sun I experienced in Florida, and the fully in bloom trees I returned to while continuing to lead my life. 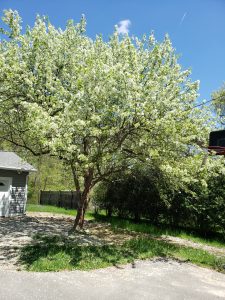 One thought on “Life, Again”