A few weeks ago, in my writing group, Nerissa, the group leader, read, as a prompt, a portion of Sylvia Plath’s The Bell Jar, where she talked about the execution of Ethel and Julius Rosenberg, in 1953. Being a red diaper baby, I grew up believing that the couple killed could have just as easily been my parents. Of course, the Rosenbergs were innocent; for my parents and their friends there was no other truth.

March 6, 2020 was the fiftieth anniversary of a townhouse in Greenwich Village, New York City, blowing up, killing three members of the Weather Underground. I knew one of the people killed – Ted Gold. I grew up with him. He was the youngest son of one of my mother’s closest friends.

The chapter of my book on faculty wives that I am currently working is about activism in the 1950s and 60s. I focus on two women – Sarah Patton Boyle and Anne Bennett. Boyle was an early white supporter of civil rights in Virginia while Bennett worked to end the Vietnam War.

My mother was a part of this activist history. As a baby, I was wheeled to Ban the Bomb demonstrations. She was a member of Women Strike for Peace. In the chapter, I describe a demonstration in Washington, DC that WSP organized. It is very possible that my mother was there.

The arc of history from the Rosenbergs to the Weather Underground is, in a simple way, the story of the Old Left morphing into the New Left; a generational shift that I was a part of. I have often wondered what my politics would have been if I had grown up in a different household. In my house, noisy discussion about politics were an everyday occurrence. Most of my parent’s friends had also been in the Communist Party. Whenever they came over, it got even louder. Being on the left is probably in my DNA. 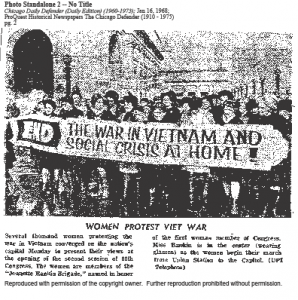