New Jersey is tied with Kentucky as the states which have experienced the greatest growth in the craft brewing industry. You can read the article about this here.  What follows are a few excerpts from Brewing Battles about three prominent New Jersey brewers.

Beginning in 1935, brewers produced canned beer.[1] The American Can Company had developed a viable beer can prior to Repeal. The company lined the can with enamel, thus earning the designation “keg-lined.” In 1933, the Gottfried Krueger Brewing Company of Newark, New Jersey engaged American Can to produce cans. The can company produced a trial run of two thousand Krueger Special Beer cans which contained 3.2 percent beer, the alcoholic content allowed by the modification of the Volstead Act. The test market approved of the taste of beer in cans, and Krueger went on to produce a line of canned beer which the company put on sale in Richmond, Virginia on January 24, 1935.[2]

The Gottfried Krueger Brewing Company dated from 1852. Its original name was Braun & Laible. By 1865 the name had changed to Hill & Krueger; Gottfried Krueger took over in 1875. In 1889, the brewery became part of the U.S. Brewing Company, Ltd of New York, a British brewing syndicate. After Repeal, Krueger reopened. A regional brewery, despite its’ brief moment of fame for canned beer, Krueger’s closed in 1960. Narragansett purchased the brand; when Falstaff purchased Narragansett, Krueger became one of its products.[3]

During the early years of Prohibition, Christian Feigenspan headed the Brewers Association Feigenspan was the head of a Newark, New Jersey brewery bearing his name. Prior to Prohibition the company had gained control of the Dobler Brewing Company, Albany, New York and a New Haven brewery, the Yale Brewery. The company resumed brewing following Repeal. Ballantine bought the firm in 1944; Dobler beer was produced into the 1960s. .[4]

One of the country’s most long lived ale brewers also had its origins in the antebellum period. Peter Ballantine, an immigrant from Scotland founded Ballantine Ale in Newark, New Jersey in 1833. By 1877, it was the nation’s fourth largest brewer and the only one that brewed ale exclusively.[5]

Prohibition had led to the closing of many breweries; during Repeal, the industry experienced growth and decline simultaneously. Some established brewers started up again, new breweries formed, and others attempted to reopen but failed. P. Ballantine and Son, New Jersey’s largest brewer in 1914 and one of the nation’s few English ale brewers, faced this fate. Although the company had planned to open following Repeal, the stockholders ultimately decide to sell their interests. Carl and Otto Badehausen bought the company and retained the name. Ballantine continued as a successful post-Prohibition brewery until the 1960s. Falstaff purchased the brand names in 1972.[6]

Falstaff Brewing was seventh in 1950. In 1972, Falstaff purchased Ballantine which also gave the company the brands of the Christian Feigenspan brewery of Newark, New Jersey. The main brand was Munich. Feigenspan headed the USBA during Repeal. In 1975, Paul Kalmanovitz, head of General Brewing (S & P Corp) gained the controlling interest in Falstaff Beer. Falstaff Beer continued as a corporate entity with its own breweries until 1990 when the last brewery in Ft. Wayne closed. It is now an apartment complex. By that time S & P also owned Pabst. Small amounts of Falstaff beer were available for sale until 2000. The shield trademark was over one hundred years old.[7] 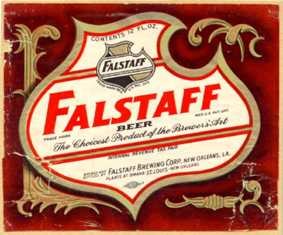