On Monday I was in New York City and I volunteered with Occupy Sandy. Because I am a nurse I was sent to Far Rockaway to help in a clinic that was being started at St. Gertrude’s Church. I had responded to a tweet and was told to show up at St. Jacobi’s in Sunset Park. I was then driven with two street medics, from Boston, to Far Rockaway.

Because there was not electricity in many parts of the island, there were a lot of cops directing traffic. Many roads were not passable; either because they had become dirt or because various crews were working on them. Part of the time we drove along the beach. There is no longer any boardwalk; instead there are huge piles of wood and sticks as well as equally huge piles of dirt and sand. 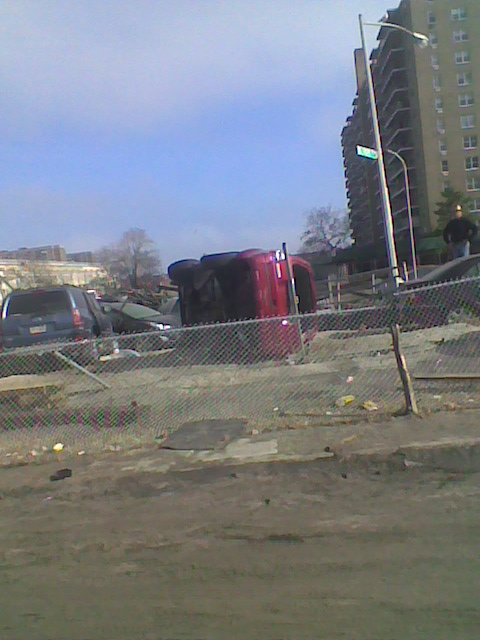 Along streets there were cars facing every direction, often covered with mud. I saw one car with its front end facing completing down and stuck.  As we drove along, on empty lots and parking lots there were ad hoc clothing and food drives. This was neighbors helping neighbors.

Although there were a lot of cops, I did not see any FEMA presence. I saw one Red Cross worker walking in the street. St. Gertrude’s was affected by Sandy. Parts of the building in which the relief effort is taking place were flooded and there were people working on restoring the damage. On Monday the building had not yet had full power restored.

The clinic had been started the day before and it was not really set up. Four nurses from NYU Hospital spent several hours sorting through the medical supplies that had been donated and  organized and set up a basic clinic. Volunteers at St. Gertrude’s have been going out and canvassing the neighborhood to see what inhabitants need, particularly concerning medical issues.

At about three o’clock I went with two street medics to check up on several residents in a high-rise apartment building.  We started to climb the stairs and at almost every landing someone had placed a chair. We saw a couple of elderly women siting and gathering their breath We climbed seventeen lights of stairs but the person on that floor did not answer. On the sixteenth floor a Russian speaking women said she was fine and did not need any help. On the fifteenth floor a man who appeared somewhat confused needed some psych meds refilled. I was able to get his Prozac but because Xanax is a controlled substance I couldn’t really do anything. After that we climbed back down. While we were in the lobby the repairman finally got elevators to work. Oh well it was good exercise.

The relief effort at St. Gertrude’s is part of Occupy Sandy which is a part of Occupy Wall Street. The experience I had volunteering on Monday to me reveals both good and bad aspects of the occupy movement. The relief effort at both St. Jacobi and St. Gertrude’s was very disorganized. I had received two emails from two different people. Neither was at St. Jacobi when I got there.

The street medic who took me to Far Rockaway was a volunteer from Boston. The person at St. Jacobi supposedly placing medical personnel did not really know anything about St. Gertrude’s and the clinic. I got a ride out there but was on my own to find a ride back.  This was something that was not made clear to me before I left St. Jacobi.

I think it is terrific that Occupy Wall Street has organized to try to provide relief to people who have been devastated by Sandy.  I do think the effort could use some more consistency and organization.  Both FEMA and Occupy Sandy have gotten good press. The situation on the ground is more nuanced.