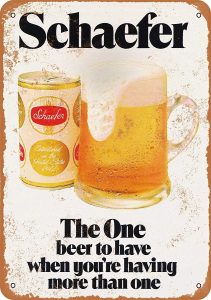 Pabst, which does not brew any beer but owns the rights to many iconic brands from the 1950’s and 60’s, is bringing back Schaefer Beer. Schaefer is associated with Brooklyn, but it is not being brewed there. F.X. Matt in Utica, N.Y. is producing the beer. You can read more about it here.

This is an excerpt from Brewing Battles, about Rudy Schaefer and Schaefer beer during World War II.

Rudy Schaefer, the owner of Schaefer Brewing, had become president of the USBA in 1941. Schaefer Brewing had begun in 1842 and was one of the country’s first lager brewers. Frederick and Maximilian Schaefer emigrated from Russia and eventually operated a brewery near Grand Central Station. Rudolph, Maximilian’s son, took over the brewery in 1912 and moved it to Brooklyn in 1915. During Prohibition, Rudolph Schaefer died, and his two sons, Frederick and Rudolph, Jr. took over. In 1927 Rudy, a Princeton graduate, gained sole control of the brewery. Having survived Prohibition, the company expanded with additional plants in Baltimore and Albany. In 1938 the brewery produced one million barrels and was consistently one of the nation’s top ten breweries. Rudy Schaefer was a long time participant in the USBA.[1]

At the beginning of 1942, Schaefer, in his capacity as president of the USBA, offered his assessment of the state of the brewing industry and its planned participation in the war effort. The good news was that “public acceptance of beer as an essential food” had increased. Tax increases were a less positive development. Schaefer maintained that the industry could not withstand any additional taxes, and that an increase would have a diminishing effect on federal revenue. After all, the industry paid over four hundred million dollars in state and federal taxes in 1941, making beer brewing the fourth most heavily taxed industry in the country. Despite this strong participation in the country’s economy, Schaefer wanted the industry to make a specific contribution to the war effort, and pledged sales of defense bonds to all of the over 60,000 employees in the industry. On a personal level, Schaefer became vice-chairman of the carbonated and fermented beverage committee of the Red Cross War Fund of Greater New York.[2]

Here is Louis Armstrong singing the Schaefer Jingle, from MjayzToonz: