On Oct. 19th I will be competing in the 33rd Annual Halloween Classic at the Winterland Skating School, Rockland, MA.  This competition is ISI endorsed; ISI stands for Ice Skating Industry and is another skating organization besides the United States Figure Skating Association (USFSA).

The USFSA is better known and is the organization that sends skaters to the Olympics. My skating club, the Skating Club of Amherst (SCA) is an USFSA club. ISI is more recreationally oriented and has more opportunities for  that beginning adult skater, like me, to compete in.

To compete at the Halloween Classic, I had to become an ISI member, join a ISI club and get a ISI coach. I did all that; I now belong to both the SCA and the Silver Ling Club. My ISI coach is Andea Newsham and my SCA coach is Kiara Sonada.

When I posted Travel, Part 2, I mentioned I had gone to Bridgewater to test the pre-Alpha level for ISI. Passing enabled me to compete at that level in the Spotlight category. To pass pre-Alpha, I had to do a two foot glide, forward one foot glides, forward and backward swizzles and a backward wiggle.

The Spotlight category is supposed to be entertaining. I have a baseball program, skating to Centerfield by John Fogarty.  Here  are pictures of me in my costume. 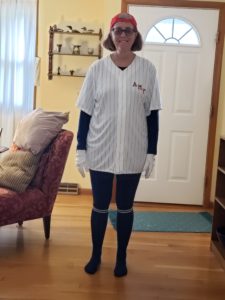 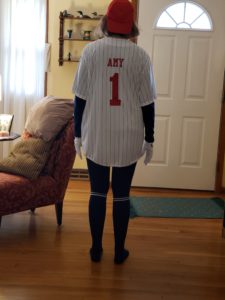 I will post about the results next week and, hopefully, have a video.