I recently attended the ADHS 2017 conference. I have attended many conferences over the years and chaired many panels. These are my observations about how to have a successful panel at an academic conference. As chair you have to keep time to insure each panelist speaks for the same amount of time. Unfortunately there is now way to compel someone to stop talking. People have to police themselves; in my experience some are better at this than others. If the chair does not keep good time it is unfair to everyone. The speakers and the audience all suffer. It is rude if you are one of the speakers and you go way over time.

The chair should definitely have all the speakers talk and then have questions and answers at the end. Allowing questions after each speaker exacerbates the time issues and very often leads to the final speaker either getting very few questions or the whole session goes over. Making sure there is time for questions and answers is  important for two reasons. Without some interaction between the speakers and the audience the session becomes a completely passive experience. Also speakers like to engage with the audience.

Four speakers at a session is too many and makes time more of an issue. To maximize time the chair should not make a statement. Maybe panels should have only two speakers but that would probably lengthen the conference.

The ADHS conference at Utrecht did have some time issues at some sessions but as always it was a very interesting experience. Utrecht is a great city and I had a very nice time. 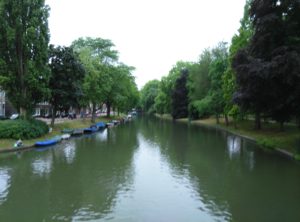 At the Alcohol Drugs History Conference, Under Control?, held in London from June 20 to June 23, Stella Moss gave a very interesting and somewhat horrifying talk about “Methylated spirit consumption and the control of deviant drinking in interwar Britain.” Methylated spirit is denatured alcohol. Hospitals and businesses use this product for cleaning and other things.

In Britain, the Customs and Excise department regulates methylated spirits. Denatured alcohol is not meant to be drunk. In fact it contains methanol and other additives to prevent consumption. It is 19 per cent alcohol. At the present there are about 500 prosecutions a year in Britain for meths drinking.

Methylated spirits is a surrogate drink; other products that serve this functional are antifreeze and hand gel. What all these products have in common are that they are cheap, relative to commercially produced alcohol.

Denatured alcohol is a byproduct of the tax code. Because states tax ethanol, drinkable alcohol, it would be too expensive for business to use ethanol for industrial purposes.

Restrictions on pubs and British drinking during World War 1 had led to moderate drinking during the 1920s. Because habitual drinkers had less access to alcohol in mainstream establishments they turned to methylated spirits.

Often people mixed the meths with other substances, using some form of ethanol. A red biddy was red wine and meths while a red Lizzie was meths mixed with Lisbon wine. Most meths drinkers were very poor.

There seems to have been lot of compulsion assisted with drinking methylated spirits. Because it is a purple color the meths drinker had a distinctive look with purple lips.

Society saw the meth’s drinker as deviant, as other. This is very similar to the current portrayal in America of the crystal methamphetamine user.

I returned yesterday from attending the American Historical Association annual meeting in New York City. The AHA is always very large and the panels are usually not that interesting. Most of the people attending are in some way involved in the job process; either interviewing or being interviewed. I am very glad I do not do that anymore. Smaller conferences like the ones the ADHS sponsors are much nicer and have more interesting panels. The few Berkshire Conferences I have attended have also been very nice.
The Hilton was the headquarters for the conference; it was very poorly run. Our room had no remote control for the TV, no hair dryer and no pen or pad. You could not get a bellman and the check-in was a nightmare. The drinks is the bar were ridiculously expensive; $11 for a Guinness and $4 for a seltzer. Of course it is New York but still.
The ADHS is an affiliate organization and always holds sessions concurrently, mostly due to W. Scott Haine. The first panel was on Friday afternoon and was on “Writers, the Creative Process, and the Influence of Drink and Drugs.” The papers were very interesting; the main question that came up for me was that of sociability and whether the sociability of a psychoactive substance affects how society looks at the substance. Alcohol has always been seen as a social activator while drugs such as opium or heroin are usually characterized as individualistic in their effects. Does society look at alcohol or coffee more favorably because of the perceived sociability of those drugs?
The other ADHS panel was one that I was on; “American Alcohol Studies Matures: The Class of 1979, Thirty Years of Reflection.” I am part of the “Class of 1979” because I helped found the Alcohol Temperance History Group (the former name of the ADHS). Dan Malleck, who is the editor of the ADHS journal, chaired the session. The other panelists either published books in 1979 or were influenced by books published in 1979.
We had a good discussion, both between the panelists and with the audience. There were many questions about transnational history and the study of alcohol and other drugs. David Courtwright, the incoming president of the ADHS, made the point that we too often do the single country or single drug kind of book. This is definitely true but there is also the problem of doability, especially for dissertations. If anyone is interested in my paper, email me and I can send you a copy.
Besides seeing Eric Foner, my dissertation sponsor and a good friend, the only other panel I attended was “Discrimination/Harassment on the Job”, sponsored by the Professional Division of the AHA and other groups. People spoke about the various, ongoing problems facing women, people of color, glbt, and disabled people seeking and retaining employment as historians.
Some of the stories were horrifying; several people remarked that Fortune 500 companies are ahead of academia in dealing with issues of family and work life balance as well as policing discriminatory hiring practices. Although I have not worked at a large corporation, I have worked in non-academic settings – hospitals. These institutions are just as capable of being discriminatory and harassing as your average history department. I think it is a bit of wistful thinking on the part of academics to believe that people working for corporations have it better.
Although I do not make my living as an academic, I do consider myself a professional historian and that is something I am proud of. I am also proud of being a nurse, an author, and a mother. The idea that one’s adult life goes along a linear path was never true for women and is increasing not true for men as well.