My original plan for this blog post was to write about my goals for the New Year. However, I have been so busy that I haven’t had time, yet, to sit down and formulate specific goals

The things I will continue to work on include my book, my website, blogging and tweeting. On a more personal level, I plan to continue skating. If I could test, compete, or perform in 2019, that would be thrilling.

One new project I will be involved with in 2019 is the Jane Austen’s Regency World Book Club which I will be facilitating at the Jones Library, Amherst. The first book we will read is Pride and Prejudice. All are welcome.

I went to the Women’s March in Boston last Saturday and found it to be an inspiring experience. I will need that inspiration because Donald Trump’s first few days as President have been terrible. 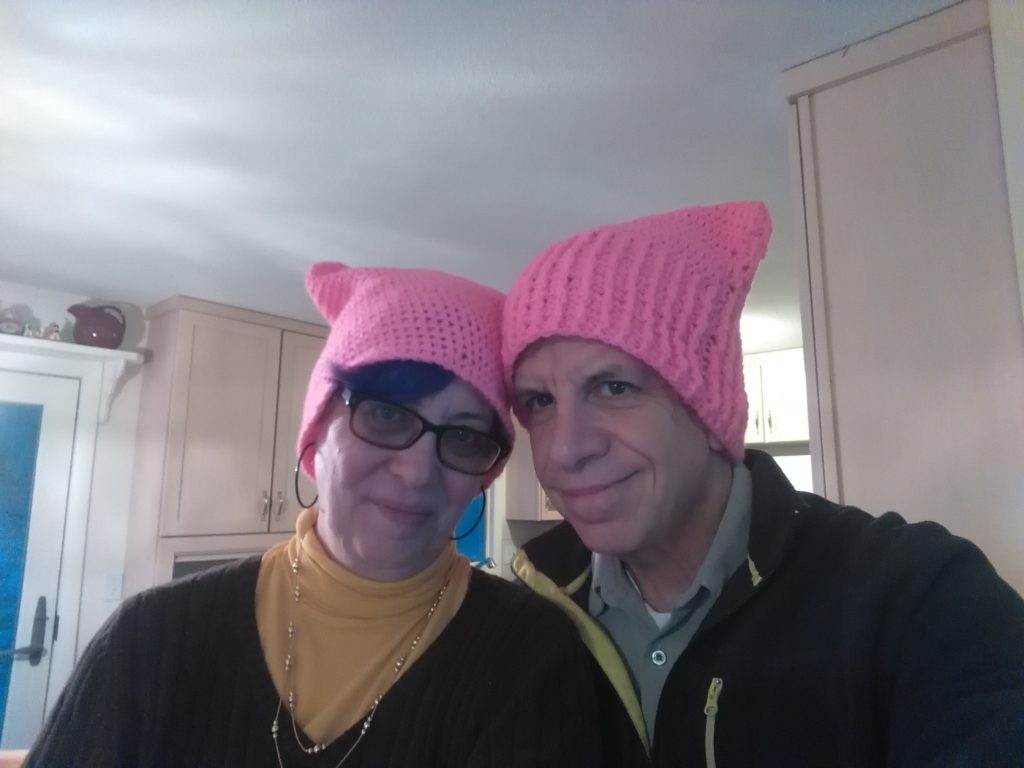 Eight years ago, I attended President Obama’s inauguration which was also inspirational. Of course, that event had a more hopeful tone since it was at the beginning of his time in office. I wrote about  being at his inauguration here.

The Boston March was less hopeful and more defiant. The people who marched are well aware of what Trump has said he will do and they believe him.  People are prepared to resist and fight to maintain civil rights, reproductive rights and liberties. 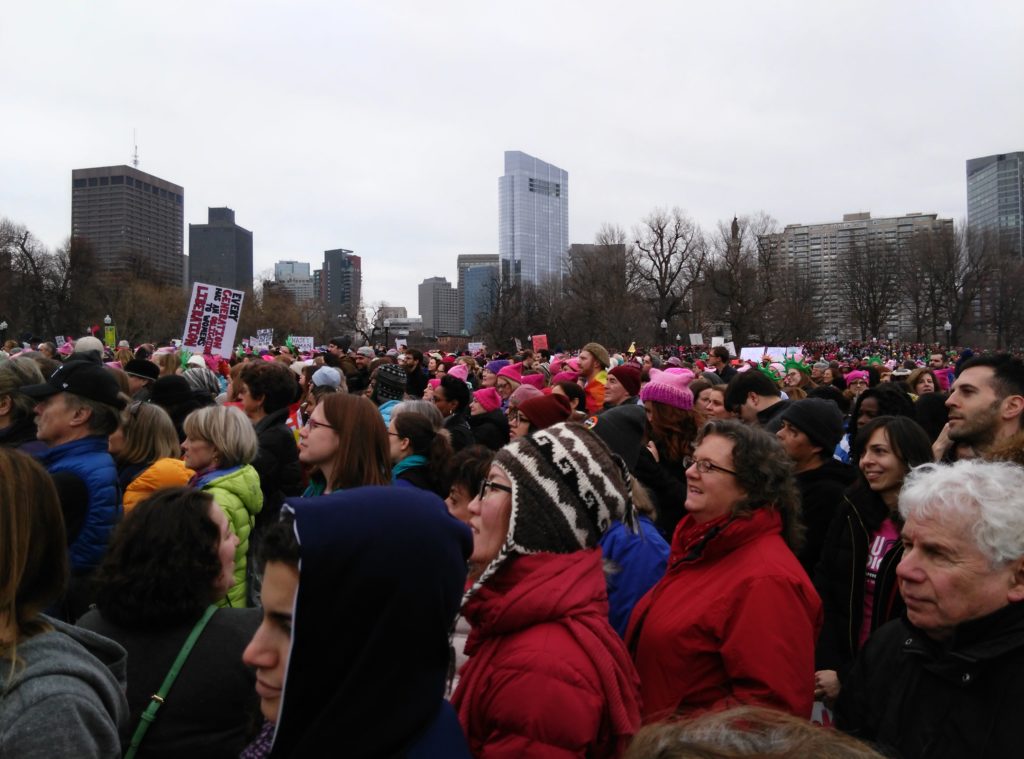 Since the election I have often felt overwhelmed and have had trouble figuring out what to do  and how to resist.  The march was inspiring  primarily  because it is great to know that over three million people world-wide feel as I do about Trump.  The March organizers are now figuring out what to do next. ( Click here to see their first action.) We will see if the energy of the March turns into a strong, ongoing movement. I hope so.

We have arrived in Raleigh, North Carolina after spending five days doing researching in Washington D.C. We stayed in Northern Virginia with relatives and just did our work, so no sightseeing. That was okay because I have been to Washington many times, mostly notably and recently for the Inauguration.

I was using the archive at Howard University, which is over 130 years old. There are some very nice buildings and the campus is huge but the library and the archive could use some updating.

We are staying near the downtown of Raleigh. We walked around the area that includes the capitol building, a state office complex, and some museums. The streets were basically empty around 5 p.m. on Sunday. Many of the restaurants seem to be open only during the week. When we were approaching Raleigh on the highway, there were strip malls on both side for several miles. My guess is that those areas have destroyed business downtown. It reminds me a lot of Springfield Massachusetts, which is the city near where I live.

Tomorrow we will be at North Carolina State University so I will see if that is any livelier. We did find an open, nice bar/restaurant near our motel, so not all was lost. Apparently, there is still smoking in restaurants. The one we ate at did not have a nonsmoking area, but come January that will be changing. I find that interesting since Raleigh is tobacco country.

I went to Washington for the Inauguration. It was amazing. My husband and I were there from Saturday until yesterday. Saturday evening we went to a Fairfax County Democratic Ball which was very interesting. It is great that Virginia went Democratic for the first time since 1964.

Sunday we went to see a Lincoln exhibit at the National Museum of American History and also saw Julia Child’s kitchen. She had two copies of Joy of Cooking which I guess means that book was as indispensable to her as to the rest of America. We also met the director of the museum. He gave us directions.

Then we walked toward the Washington Monument to try to attend the We are One concert. We hooked up with a lovely young woman named Rima and her sister. Rima is a Washington native so she was very helpful and extraordinarily nice. The whole time in Washington everyone was very nice. We wound up being pretty close to the stage at the Lincoln Memorial, , and I did see with my own eyes, not on the JumboTron, the bottom half of Obama walk to the podium so I guess that we can count that as my Obama sighting.

The concert was very exciting. Garth Brooks was the best. When Pete Seeger and Bruce Springsteen sang “This Land is Your Land” everyone was singing. One person near me was pledging allegiance. The concert built as it went along and Obama’s speech was very good. Beyonce closed the concert which was very entertaining.

On Monday we walked completely around the Tidal Basin and saw both the Jefferson Memorial and the Roosevelt Memorial. The Martin Luther King Junior Memorial will also be on the Tidal Basin which is where the Cherry Blossoms are in the spring. The scenery was beautiful. (I will put up pictures in the next few days.) Since it was Martin Luther King Day and President Obama said it should be a day of service, we went and picketed in front of a Hilton Hotel with the workers from the hotel. Apparently they have been working without a contract for a year and a half. All of the candidates for governor of Virginia were there including Terry McAuliffe, Hillary Clinton’s campaign manager. He was the biggest celebrity we saw on our trip. He was passing out cookies.

Tuesday morning we go up at 3:15 in the morning and made our way to a subway stop parking garage in Northern Virginia. Even that early there was a line and many, many people on the Metro. We went to my sister-in-law’s office which is relatively close to the Capital We ate some breakfast and had some coffee then set out to get to the Mall to see the swearing-in. There were more people on the street then I have ever seen and it was only 6:30 in the morning.  My brother had two tickets but very nicely gave them away to stay with us and his children, who are eighteen and fifteen. We were trying to get to 7th and Independence which was the start of the non-ticketed standing area on the Mall. At one point a truck needed to get by and everyone had to squeeze together. Near 7th a guard told us that we should go on to 12th or 14th. We wound up getting on to the Mall at 12th – there was no security- and watched the whole on a JumboTron between 9th and 12th.

I feel so fortunate that we actually got onto the Mall and saw the whole thing live. It was very cold and we stood there from 7 a.m. until 1p.m. They showed the concert again as a warm-up and then the ceremony started at 10 a.m. The crowd was enormous  and very friendly. There were millions of flags and every time there was anything to cheer about everyone waved them at the same time. It was so moving to see the flags and to feel so good about my country. To be in Washington for a positive reason and share that with so many people was truly a blessing. When Obama spoke and stood up for the Constitution and civil liberties it was thrilling. Reverend Lowery’s benediction was stunning and it was a great feeling to say Amen with everyone else. Only my feet got cold and I put hand warmers in my shoes. Attending the swearing in feels like I got a  gift. Yes We Can! Yes We Did! Yes We Will!