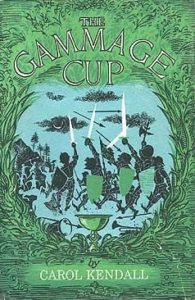 Last night when I couldn’t sleep, I reread one of my favorite books, The Gammage Cup by Carol Kendall. I loved the book when I was a child and I still do. Kendall wrote several books, including  a sequel but The Gammage Cup is her most famous work. As an adult, I read the sequel, The Whisper of Glocken but I didn’t like it as much. I am going to reread it also; just to see if I will like it better.

The Gammage Cup  is about five outsiders, people who were different, living in a very traditional, insular commuunity of Minnipins. Eventually village officials outlawed Muggles, Gummy, Walter  the Earl, Curly Green and Mingy. As an aside, Kendall used the word, “Muggles” thirty years before J.K. Rowling. In the end,  these five Minnipins saved the whole village. On their return to the community they received a heroes welcome.

Kendall wrote the book in 1959; it may have been a response to McCarthyism. The Gammage Cup is about accepting difference and living peacefully in a diverse community. It is a sweet fantasy although there is a lot violence in the battle scenes.  Once the enemy, the Mushrooms, are recognized, Walter the Earl and the others realize they must be defeated. There is no diplomacy.