This year, we read Northanger Abbey. On Thursday we will be discussing The Mysteries of Udolpho by Ann Radcliffe. Scholars consider Udolpho to be the first Gothic novel. Austen satirized it in Northanger Abbey. Udolpho is a very long book; almost 700 pages.  The gothic or “frightening part” is the middle third. It was slow reading up until that point and then the pace picked up.

During her stay at the Udolpho castle, Emily, the heroine suffered mightily. Many eerie and unexplained things happened. The author also builds suspense because you do not know if there will be a reunion of Emily and her love, Valancourt. After Emily leaves the castle, the pace of the book slows down again.

In the end, there is a rationale explanation for everything that occurred. Emily is a sensible, intelligent young woman. Throughout the book she only rarely succumbs to belief in the supernatural. In this way, she and Catherine Moorland, Austen’s heroine, are similar.  Catherine, partly because she is reading The Mysteries of Udolpho throughout Northanger Abbey, initially believes horrid things have happened in the castle she is visiting. In the end of her book, sense prevails as well.

I had mixed feelings about The Mysteries of Udolpho. There were parts I enjoyed and parts I disliked. The book, while it might have been new in 1794, feels dated in a way Northanger Abbey doesn’t. 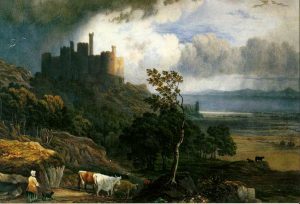