One of my goals for 2017 was to work more regularly on my book on faculty wives. Recently I have been able to do that and I have run across an interesting subject. Various World’s Fairs have come up in my research because the fairs have often been contested spaces.

The chapter I am working focuses on African-American wives and their clubs. Beginning with the Chicago Exposition of 1893 and going on until at least the NY Fair of 1939, African-Americans sought a seat at the table. Women, both black and white, also sought representatives.

The fair that is most interesting to me is the St. Louis Louisiana Exposition of 1904. Josephine Yates, President of the National Association of Colored Women, (NACW) negotiated with the Fair managers to have a World’s Fair Day for the organization. Other African-American groups also arranged for days.

Hallie Q. Brown, a member of NACW sought employment at the Fair and was refused. This prompted Margaret Murray Washington to urge the NACW convention to boycott the planned event. This became the official position of NACW, however many convention attendees did visit the fair. Interestingly, Booker T. Washington disagreed with his wife, feeling that cries of racism were over stated.

Over 10,000 people picketed the offices of the NY World’s Fair in 1939 demanding employment for black people. The women had more success, happily attending  a National Association of Colored Women Day at the Fair. 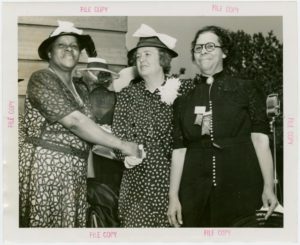